Zurbaran scholar and co-author of the Pelican History of Art volume, Baroque Art and Architecture in Spain and Portugal and Their American Dominions, 1500-1800. Soria was the son of Carlos Schapira, Ph.D., (1879-1957), an engineer (and later Technical Director) at Telefunken, Berlin, and Pola (Heilpern) Schapira (1887-1964). The couple changed their name to "Soria" to avoid the anti-semitism in Germany at the time. The younger Soria attended Zuoz College, Zuoz Switzerland. The rise of national socialism in Germany forced Jews, such as Carlos, to be dismissed from their posititions in 1933. The family moved to Madrid where the younger Soria earned a B.A. from the University of Madrid the same year. At his father's insistence, he entered law school, receiving his Doctor of Jurisprudence degree at the University of Zürich in 1935. Spain, however, was now engulfed in a civil war and once again the family was forced to flee fascism. Martin Soria and his brother moved to the United States, sponsored by a colleague of his father's in New York. His parents followed in 1941. Soria began studying his true passion, art history, at Harvard University, receiving an M.A. in it in 1942. During World War II he taught Spanish to American GI's. He married Marion Louise Vail (1922-2003). Soria settled on Spanish art for his dissertation topic owing to the time he spent at the Prado during the family's stay in Spain. Harvard art historians Chandler R. Post and Frederick B. Deknatel supervised his research. He worked for eight months in Spain initially researching El Greco until the artist's archives were withdrawn and moved to a place of safety. Soria then decided to write on Mexican art, but again, after a year's research in the country, Mexican travel was restricted due to the War. He then determined to write a catalog of Spanish painting for his thesis, though upon advice of his committee focused simply on Francisco de Zurbaran. Soria became a United States citizen while writing his dissertation. During this time he taught art as an instructor in the Spanish Department at Princeton University (1944-1946). He accepted an appointment at Michigan State University as a visiting lecturer in 1948. His dissertation on Zurbaran, in addition to  Post and Deknatel, was supervised by Jakob Rosenberg (and perhaps Benjamin Rowland, Jr.), and accepted in 1949. Soria was offered a tenure-track position at MSU as assistant professor; the following year he was awarded a Guggenheim fellowship. He published an extended version of his dissertation in 1953 as The Paintings of Zurbaran. In 1956, Soria issued a volume on Renaissance painting in Latin America, published by the University of Buenos Aires' Instituto de Arte Americano e Investigaciones Estéticas. The same year he was appointed full professor at Michigan State. The Yale art historian George Kubler contacted Soria to co-author the volume in the Pelican History of Art, which Kubler had convinced the series editor, Nikolaus Bernard Leon Pevsner, to expand from a volume only on Iberian visual arts. Kubler wrote the section on architecture and Soria the second half, on painting and sculpture. The volume, Baroque Art and Architecture in Spain and Portugal and Their American Dominions, 1500-1800, appeared in 1959. While en route to the Congress on International Cooperation in Spain, he was killed when the Sabena Airlines jet he was riding in crashed at the Brussels airport.

Soria's 1952 article, "Una nota sobre pintura colonial y estampas europeas," demonstrated that Latin American artists produced paintings in part copied from images in printed books rather than original designs. His knowledge of Spainish books allowed him to recognize this, mapping several works to illustrations in contemporary books. At the time of his death he was the principal scholar of Zurbaran in the English-speaking world.

Archival documents: a personal lament by Soria at his numerous attempts at his dissertation (detail) 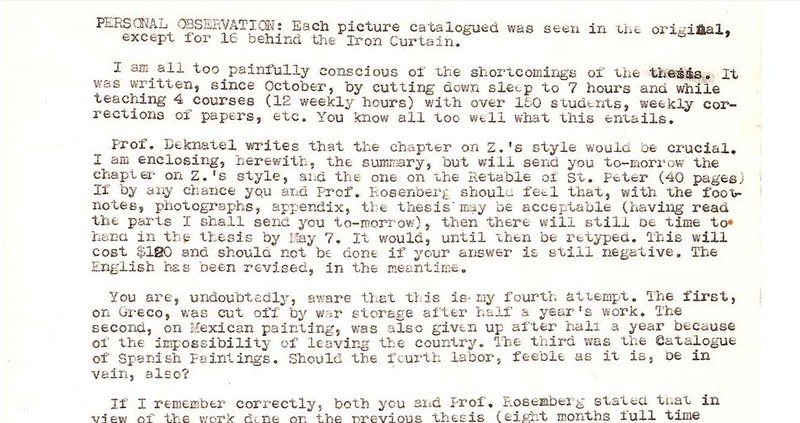 Archival: Telegram of his dissertation acceptance 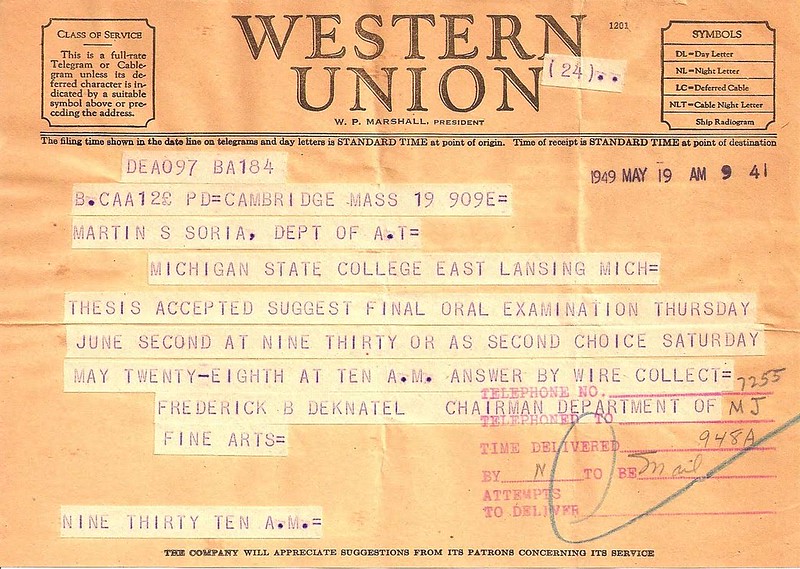 Search for materials by & about this art historian: